Seham Guirgis  was born in Cairo, Egypt  and immigrated to Canada in 2001  with her husband and two young sons.

Seham arrived in Canada as an accomplished artist. In 1986 she acquired a Bachelor of Arts in Art Education from Helwan University, Cairo and  in her first year she also started training with Dr. Isaac Fanous, founder of neo-Coptic iconography at the Institute of Higher Education for Coptic Studies. In 1990 she graduated with a master’s degree from the Institute. On graduation, Seham was appointed as Assistant Professor at the Institute  and worked closely with Dr. Fanous for several years.

Seham  has had several solo and group exhibitions of her icons and mosaic works in the United Kingdom and in Egypt. Her icons are in several churches and monasteries in Egypt. She is privately collected in Egypt, Canada, and several other countries. Her icons of St. Helena, the Empress and founder of the True Cross and of St. Joseph are in the collection of the Coptic Museum of Canada. She has also taught courses in Coptic iconography at the Museum.

One of her first exhibitions in Canada was in 2002 at the Archangel Michael & St. Tekla Coptic Orthodox Church (Brampton) Festival and later in various Coptic festivals at St. Mark Church, Scarborough. She also displayed her icons at the Coptic Museum of Canada’s ’exhibitions:

Tempera and gold leaf on wood

Neo-Coptic Icon of St. Joseph and the Divine Child (2011) 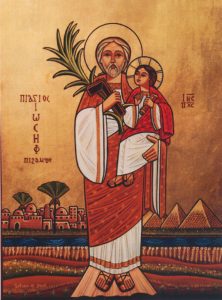 Tempera and gold leaf on wood