THE VISION AND THE MISSION
In 1964, Father Marcos was ordained to the priesthood and commissioned to minister to the spiritual needs of the Copts in North America. He asked His Holiness Pope Kyrillos VI if he could also establish a Coptic museum in order to introduce the rich cultural heritage of the Copts to future generations and to the local population. At the time, he did not know whether he would settle in a city in Canada or in the United States of America. Canada offered him a work permit, and so he settled in Toronto.

While Father Marcos was serving the Copts and establishing churches across North America, he was simultaneously collecting the initial artefacts for the museum. It took him twenty-five years and several trips to Egypt, France, and the United States to research and collect these items.

Among the prized artefacts he collected in this period are six biblical scenes by Marguerite Nakhla, who in 1975 was named the leading Egyptian woman painter. Father Marcos initially offered to purchase one painting, but once Ms. Nakhla saw that the Museum would be a place where people could learn about the way her paintings revived third-century Coptic religious art in a modern form, she offered him the full collection of six biblical scenes as a gift. (See link Explore the Museum – Marguerite Nakhla.) In keeping with the commitment he made to Ms. Nakhla that the Museum would provide opportunities for people to learn about her art, in 2009 Father Marcos wrote the introduction to a book on her life’s work published by the Museum, Marguerite Nakhla: Legacy to Modern Egyptian Art.

Another unique artefact Father Marcos was able to acquire is the stunning painting of three crosses on 1mm graph paper made by His Holiness Pope Makarius III, the 114th Coptic Pope, when he was a monk (ca. 1888–1895). This style of cross is known as a “yota cross,” since its design makes repeated use of  the shape of the letter yota in the Coptic alphabet, the first letter in the name Jesus (pronounced Iyesus). (See link: Explore the Museum – Paintings.)

As Copts heard about Father Marcos’s vision and efforts to build the collection, they began to donate their personal collections to the museum. The Museum’s initial collection included Coptic icons, clay works, jewellery from different periods of history, manuscripts and old books, paintings, and textile fragments. In Father Marcos’s words, the Museum’s collection was to represent a colourful “tile” in the Canadian multicultural mosaic.

On 27 November 1996, His Holiness Pope Shenouda III inaugurated St. Mark’s Coptic Museum. The plaque commemorating this pontifical visit expresses the wish of His Holiness that the Museum “always be a beacon of enlightenment in the North American Continent.” 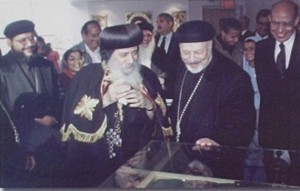 His Holiness Pope Shenouda III and his Excellency Mahmoud Fargal Admiring exhibits in one of the show-cases. Back left, Father and Mrs. Misael of St. Marks’s. Back right, sister Veronia of the Coptic African Mission in Zambia. 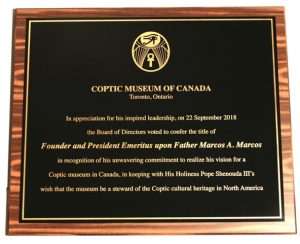 St. Mark’s Coptic Museum was opened to the public on 9 July 2000, after Father Marcos had trained six volunteers to be Museum Interpreters. In 2001 the first Board of Directors was appointed, with Father Marcos at the helm as President. He held this position until he retired in 2018.

The new name reflects that the Museum serves all Copts and Churches, irrespective of city and province. The name also implies, correctly, that it is the first, and to date the only, Coptic museum in Canada.

On Saturday 15 December 2018, Father Marcos and over forty members of his extended family, friends, St. Mark’s Church clergy, and Museum members gathered together in the Museum lobby to unveil a plaque in his honour.

Labib Mousa, President of the Museum’s Board of Directors, explained the Board’s decision to honour Father Marcos as follows: 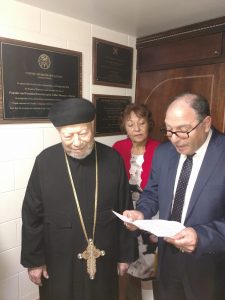 Welcome, everyone, and especially Father Marcos, to this first of several actions the Museum’s Board of Directors is taking to honour you for your vision to create a Coptic Museum in Canada and for your inspirational leadership, which has touched so many of us.

We all know how much Father Marcos has contributed to our Church in Canada, but I also want to mention that he has received several public recognitions for his service as the first Coptic Orthodox priest commissioned to North America, and also for his role in the establishment of a Coptic museum in Canada. For example:

Majesty’s Accession to the Throne and in recognition of your contribution to Canada.”

At its 22 September 2018 meeting the Museum’s Board of Directors passed a motion to honour Father Marcos’s role in establishing a Coptic museum in Canada. The Board also wanted this motion to be commemorated with a plaque at the entrance hall to the Museum, alongside the plaque commemorating His Holiness Pope Shenouda III’s inauguration of the Museum in 1996. The plaque reads

The Board also decided to take the following actions:

Thank you for celebrating this special occasion with us today.