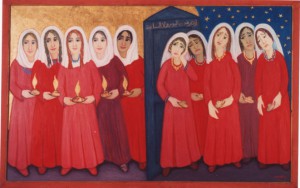 Coptic Folkloric paintings started in the ca. 3rd century and died in the ca. 12th century. Ms. Marguerite Nakhla revived this art in the 20th century.  The Coptic Museum of Canada is the only museum to exhibit six biblical scenes in Coptic folkloric style painted by Marguerite Nakhla. It is therefore the only place where one can study Coptic folkloric art.

Coptic folkloric art seeks to relate folk culture to the religious/biblical story. Paintings depict the dress of the period and give traditional and environmental details.

“…more precisely your art brings together the best of the ancient Coptic style with the best of modern art. It is a renewal that does not break away from the ancient while at the same time assimilating the contemporary that creates the opportunity to initiate a new and authentic Coptic art with a genuine religious feeling. I do not believe I am wrong to assume that you are initiating a new path and that you will have many disciples… ”

She had a bent for drawing and painting since her childhood. From the age of six, she would decorate her letters to her little friends with flowers and other motifs of her creation. In her early teens she received many school awards for her art.

Ms. Nakhla graduated with honours from the School of Fine Arts, Cairo, 1934. She won a scholarship to study in France (1934-1939) at the “Ecole Nationale Superieure des Beaux Arts,” Paris, France.

Ms. Nakhla was noted for the diversity of styles she used in her art. She painted several hundred themes that were displayed in more than 30 exhibitions in both Egypt and abroad and particularly in France. She was also awarded gold, silver and bronze medals in international exhibits for her folkloric and other paintings. Her painting “Dimanche au Luzenbourg” was awarded the Bronze Medal at the 1937 International Exhibition in Paris.  She was selected as one of the ten Egyptian women painters at the 1975 exhibition “Women Painters the Past 50 Years”. One of the celebrations commemorating the United Nations Decade for Women. She was introduced as “the leading artist” of this period.

Comments about her painting from art critics in Egypt and in Europe:

Marguerite Nakhla honoured:
The Museum of Modern Egyptian Art in Cairo has 17 of her paintings in its collection. On 29 January, 2006 Ms. Nakhla together with 19 other artists born in the same month were honoured at a special event. At this occasion a relative of Ms. Nakhla was offered a certificate of recognition and a gold plated paint brush. Both mementos were in turn given to the Coptic Museum of Canada in recognition of our research on Ms. Nakhla and her works.

To order this book:
Print out this PDF flyer, fill it out and mail it to:
Coptic Museum of Canada
41 Glendinning Avenue
Scarborough, Ontario
M1W 3E2 Canada