In addition to the Biblical scenes by Marguerite Nakhla  and Coptic icons, the collection at the Coptic Museum of Canada showcases paintings by the Copts from the 18th to the 21st century. This growing collection is the Museum’s way of affirming Coptic visual artists, past and present. 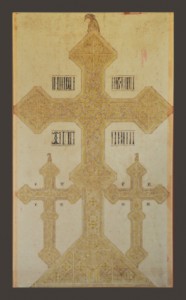 This watercolour painting on millimetre geometric graph paper was rendered by Pope Macarius III when he was still a monk in the monastery of Anba Bishoy in Wadi el-Natrun (1888–1995). He was known as a manuscript illuminator. The painting was accomplished with a very fine paintbrush and looks like intricate and delicate cross-stitch embroidery. The work consists of three crosses, with a large cross between two smaller crosses and a multiplicity of crosses within each cross. A closer look at the brush strokes will reveal how the Coptic alphabet letter “Ι”, pronounced “e” and  called Yota is used to form the shape of all  the crosses. The yota letter is also the first letter in the name “Jesus”  and pronounced Esoos in Coptic. Thus the reason for calling this style of cross  the “Yota Cross.” The writing in Coptic and Greek means “Jesus Christ the Son of God.”  An eagle rests on top of each of the three crosses — the eagle was an early representation of the Resurrection. 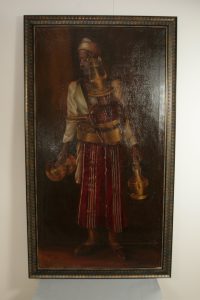 Isaac Girguis Barsoum (1912–1983) was a contemporary of Marguerite Nakhla and graduated from the Applied Arts College in 1934. Between 1934 and 1972, he taught fine arts in technical schools in Assiut, Tanta, Damietta and Cairo.

́Irq ́isūs is a liquorice drink that dates back to ancient Egypt and was mainly used for intestinal medicinal use. The street-vendor tradition in Egypt, however, probably started in the Ottoman period. With increasing street traffic, vendors created carts and now the drink is served in stores selling fruit juices. 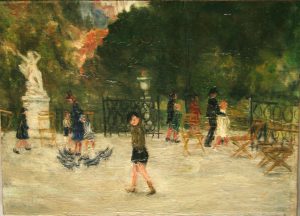 Marguerite Nakhla had much of her artistic formation in Paris. This scene of the Gardens  of Luxembourg  is an example of one of her many  French scenes in the Impressionist style of the period. 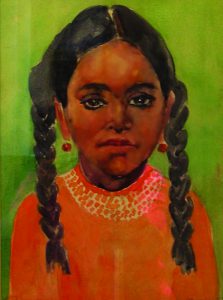 Professor Kawkab Youssef (1909–2008) taught art education at the Teachers’ Higher Institute for Arts for Women in Cairo long before it became a faculty in Helwan University. Together with Marguerite Nakhla who was a colleague and a close friend, Dr. Youssef was among the Institute’s first teachers. Dr. Youssef was a professor of art at the Helwan University’s department of art education until she retired at the age of ninety-four. In 1999, at ninety years of age, she was one of the oldest living professors of fine arts in Egypt. Despite her age, she had two public exhibitions of her works in 1999. Asked why she had not exhibited her works more often, Dr. Youssef said she was more interested in the “study of art. This is what I have dedicated my whole life to.”

Nubian Girl (1990) is one of Dr. Youssef’s many watercolour paintings. The Museum’s Cecil Barsoum Reference Library has a publication of all her works.

Mina el-Gebaly (the artist’s pseudonym means “mountain climber” in Arabic) was born in Egypt in 1979 and immigrated to Canada in 2004.

His artistic work is inspired by his belief that art can provoke people to raise difficult questions about the barriers to peace. “The challenge” he said “ is to ask myself how art can become the catalyst that will engage the cooperation and contribution of all people to share in the same goals and to “climb” the same mountain peak…from the mountain peak one has a better sense of the real values in life, and towards peace between and among people and nations.”

Peace Planter is one of a series of three paintings on the theme of peace. The two other canvases are titled Peace Dancer and The Way of Hatred. 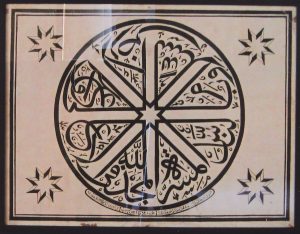 “Glory be to God in the heavens and on earth. Peace and Good will towards man.” which is from the Gospel of St. Luke, 2:14. The design inside the circle is “Chi (X) Rho (P)” which are the first two letters in Greek for the name of “Christ” and the Cross.

Below the circle in between the two curved lines Arabic text:

Made in 1926 by Lemei Abdel Malek, the designer for Farag Henein. From the Gospel of St. Luke 2:14