Ramses Wissa Wassef’s (1911-1974) love of art earned him the nickname “the artists’ at the age of five. As an adult he always wanted to be a sculptor but on he advice of his father he studied architecture in France.

Ramses Wissa Wassef believed that all children were born artists but that their creativity was stifled with schooling that demanded copying rather than creating. His opportunity to put his beliefs to the test came in 1941, when he was asked to build a small primary school in Old Cairo. When the buildings were completed, he asked the principal if he could teach the children weaving. He chose weaving because it combines a manual craft with artistic creation. Children were taught the technique of weaving by a local weaver and then encouraged to create their own designs from their own environment as they worked on the loom — i.e., without sketching the designs or tracing the designs on the loom — thus reviving the method used in earlier centuries in Coptic textile weaving .

The children did so well that Ramses Wissa Wassef felt encouraged to plan for a centre where this creativity could be nurtured and fully developed. Together with his wife, Sophie Habib Georgy, he bought a piece of land just below the Pyramids of Giza in Harrania Village. The Centre started with twelve children between the ages eight and ten. These young weavers became known as the “first generation of weavers”. As they developed their skills, they also set up workshops in their homes, expanding their sources of income. Textiles produced at the Wissa Wassef Centre always have an embroidered ”WW” (i.e., Wissa Wassef ), the name of the weaver, and sometimes the date of completion. Wool rather than flax is used and, more recently, also cotton. All dyes continue to be produced from plants grown at the Centre.

The three principles of art education that guide the educational spirit of the Centre are:
1. No drawings or sketches, because creating directly on the material itself provides a channel for the creative effort.
2. No external aesthetic influences. Children are not asked to imitate nor are they shown models. They are not taken to museums or art galleries.
3. No criticisms or interference from adults, because adult criticism can cripple a child’s creativity.
The works of the weavers have been exhibited in Egypt (in Cairo, Alexandria, and Ismailia) as well as in the U.S.A. and many European countries.

During Ramses Wissa Wassef’s lifetime, workshops at the Centre expanded to include stoneware ceramics, weaving with fine cotton (in 1962), and batik (in 1965). Daughters Suzanne and Yoanna joined the Centre in 1972 and 1974, respectively; Suzanne works with ceramics, and Yoanna with cotton weaving and batik. Since the passing of Ramses Wissa Wassef (1975), Sophie and her two daughters continue the legacy of this visionary. 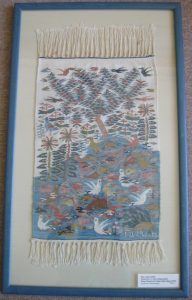 2004.2.1
Garden on the Nile (2004)
57cm x 30cm
Ramses Wissa Wassef Centre, Harrania, Giza
Multi-coloured hand-woven cotton tapestry
On the right-hand corner are embroidered “WW”
and the name of the weaver: Nadia. (she was 17 years old)
Photo: Coptic Museum of Canada 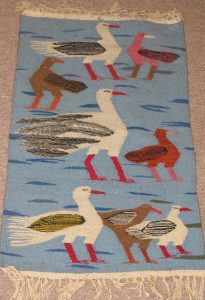 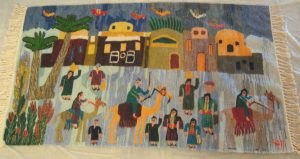 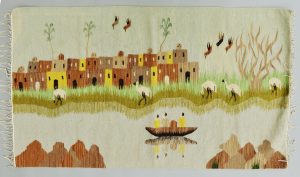 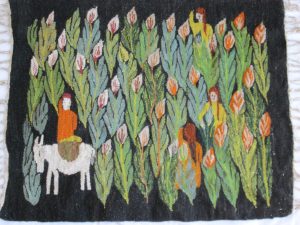 The Ramses Wissa Wassef Centre is best known for its beautiful tapestries, equally creative are the clay and ceramic works produced at the Centre. This filigreed terra cotta wall plate with the image of the St. Mary and the Christ Child was created on the occasion of the apparition of St. Mary on the dome of St. Mary’s Church, Zeitoun (suburb of Cairo), in 1968. 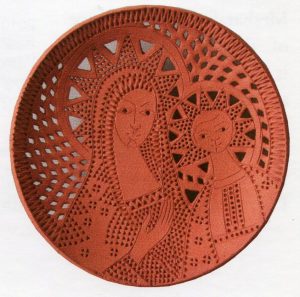