Quite apart their postal value and purpose, stamps are also communication tools.  They tell the story of how mail has been handled, who has handled it, and why,  the history of a people, their identity and their culture.

The first Egyptian stamps depict images of ancient Egypt, thus the Sphinx and the pyramids, but quickly shift to portraits of leaders and figures of power.  In later periods one finds a wide range of images covering almost every aspect of Egypt’s cultural, economic, political, and social  life, as well as national achievements and history.

The first stamp issued in 1866 when Egypt
was still under Turkish suzerainty.

Commemorative stamp with portrait of Khedive Ismail (r.1863-1879)  who established the Egyptian Postal Service in 1865.

The postal service was used  as a public utility for government matters only. In its formative years, post was most frequently used for trade and economic purposes. Initially Egyptian postal offices were opened in countries east of the Mediterranean Sea, bordering the Red Sea and in the Sudan.

Example of a stamp issued under Turkish Suzerainty with Sphinx and Pyramid (1867-1869) .

Caliph Mo’awia Bin Abi Sufian, founder of the Ummayad Dynasty and governor of Syria (r. 661-680) is said to have introduced the first postal system during Islamic period.  Messages were carried on horseback and had designated stops along the way to exchange horses. This “express post” was only organized for government representatives. The most important mail line in this period was between Egypt and Syria

King Farouq with three black bars that obliterate his portrait communicates that he was no longer the king in 1951. 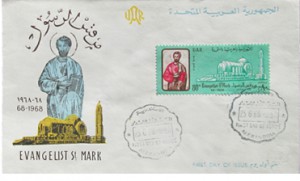 First day commemorative envelope with image of St. Mark the Evangelist and St.  Mark’s Coptic Orthodox Cathedral at Abassaya, Cairo, and a stamp with St. Mark’s image. Issued on June 25,1968.

Commemorative envelope and stamp were issued to mark the return of the relics of the St. Mark from St. Mark’s Church in Venice, Italy.